I got to choose this week's theme for the Beautiful Beasties Project 52. I wanted something that would force me to use a different technique that I could then carry into my client sessions. I had played with reflectors in the past, and stopped using them as I pushed myself to learn off camera flash. I liked what I was getting for outdoor evening and indoor strobes, but was not as happy with the balance of light in my natural light outdoor work. I was getting too much variation in shadow on my subjects. So my choice for this week's theme was "Reflectors".

I went back and found some good blogs on the use of reflectors when subjects were back lit, side lit, in shade, partial shade....  I was armed with my rarely used reflector set. After a seminar I had purchased one of those triangular shaped white with handle type reflectors. The base is white, you can alter it with silver, gold and black covers for various light modification.  First, I and my assistant found the base white reflector awkward. After popping it from the little storage bag, it would not stay flat. This caused issues with getting good even reflected light. After playing with it a bit my assistant (Peggy) found that cupping the bottom corners gave her some amount of consistency. I can honestly say, I plan on selling this set and getting a good old fashioned round set.

Second, where I was used to using reflectors below human face level to remove shadow from faces, this did not work with the dog. Our faces have dips and protrusions that dogs simply don't have. The muzzle of a dog, when a reflector is used from below, actually causes more shadow above the nose. We found holding the reflector directly in front of the dog, or slightly higher on the dogs head worked best for fill. We had to adjust that again when using the reflector as our "main light".

My 9 year old Border Collie, Belle, was very patient with us as we played with Peggy's placement and position of the reflector to get the effects I wanted. Then I found I had to move around a bit since the reflector has to be close to the subject and it had to be held 90 degrees to the ground, potentially blocking my line of sight to the dog. It is harder to hide the reflector from the shot as when a human is holding it flat at waist level or sitting on it bouncing light up rather than direct into the face. That in itself was tricky, how can you do this without causing the dog to squint? This was a great learning experience, and I was eventually happy with the results and techniques we used.

The first shot of Belle was direct sunlight at her back, which meant her face was in shadow. I wanted that wonderful rim light on her fur, but needed to fill her face with reflected light. We chose the white reflector held pretty much in front and a smidge to the right of Belle's face and approximately 3-4 feet from the dog. I tucked in below Peggy's right side to shoot. Look at how well it lit her face, pulling shadows away from her nose end eyes, but leaving just a hint of shadow on the left side of her face. I love the catch light in her eyes from the white reflector! By using the white diffused reflector we got a softer fill that did not blow out all that white fur on her front. 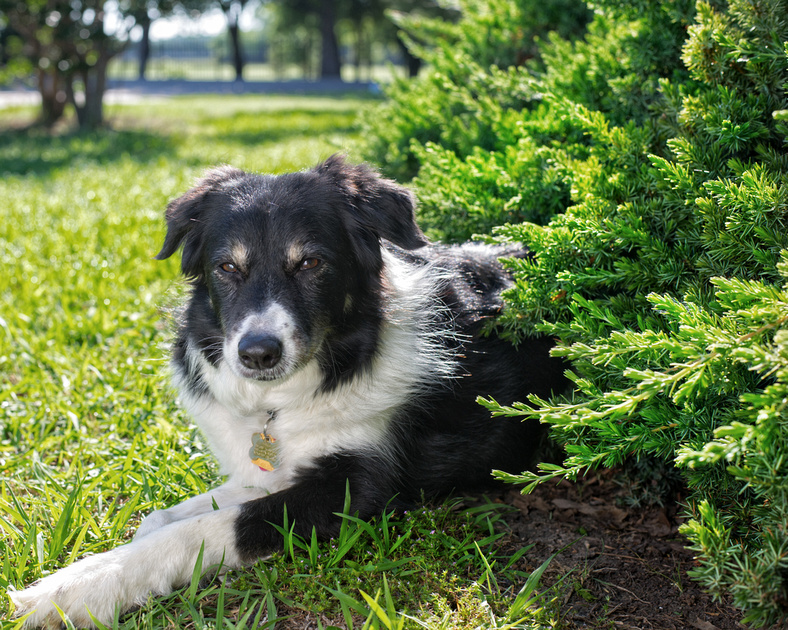 Next we went to an area where the sun was coming in directly from Belle's right side. This meant the left side of her would be in shadow. Because the foliage also blocked natural reflection from the sun, we chose higher reflective metallic covers for the reflector. First a warmer version then sliver for the 2nd shot below as fill light. Peggy found a pool of light off the Belle's left side, pointing the reflector directly at her, and held it such that the bottom was a few inches off the ground. She was about 5 feet away since the metal reflector throws harsher, less diffused light. Again I was pleased with the evenness of the light on her face. 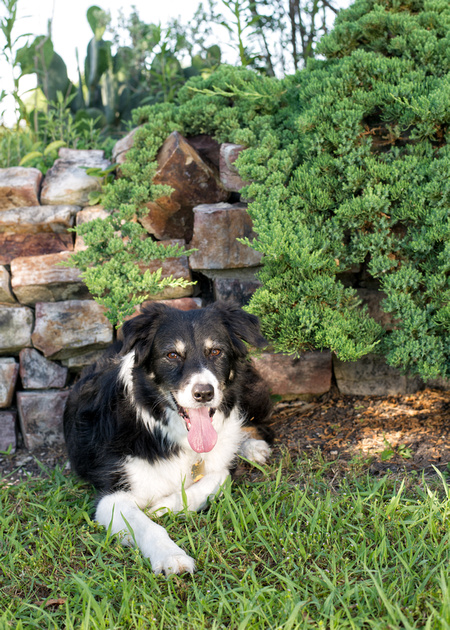 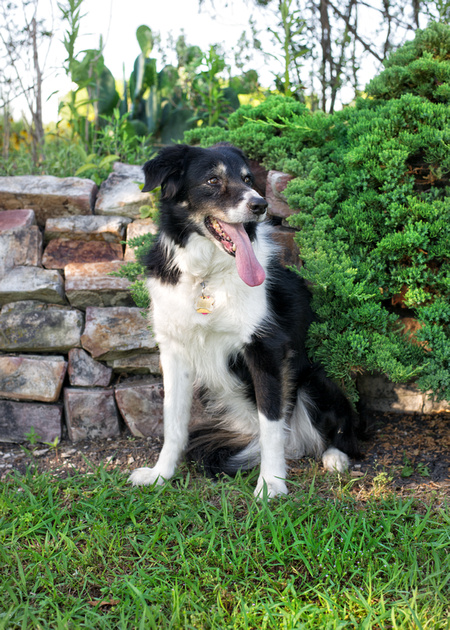 For the next shot, Belle was tucked under a tree, sitting in shadow. There were some pools of light scattered around, but I wanted a strong light to focus on her. So we chose the the silver cover and held it directly in the sun to use the reflector as a main "light" rather than just a fill. It took some finagling with the reflector to get that direct light to land on Belle, and Peggy had to be directly facing the sun, then bounce the reflected light down to Belle. So she was to Belle's left and I shot from Peggy's left. We had to find direct sun rays that would allow Peggy to be no more than 5 ft from Belle. By holding the reflector a little high and bouncing the light slightly downward, we did not blow out all that white on her chest, although we were using the brighter reflector material. It did turn her little brown eyebrows a bit "white", but I was still pleased with the effect. The branch near her head even caught some of the reflected light. It also allowed for the catch light in her eyes as she looked slightly upward. 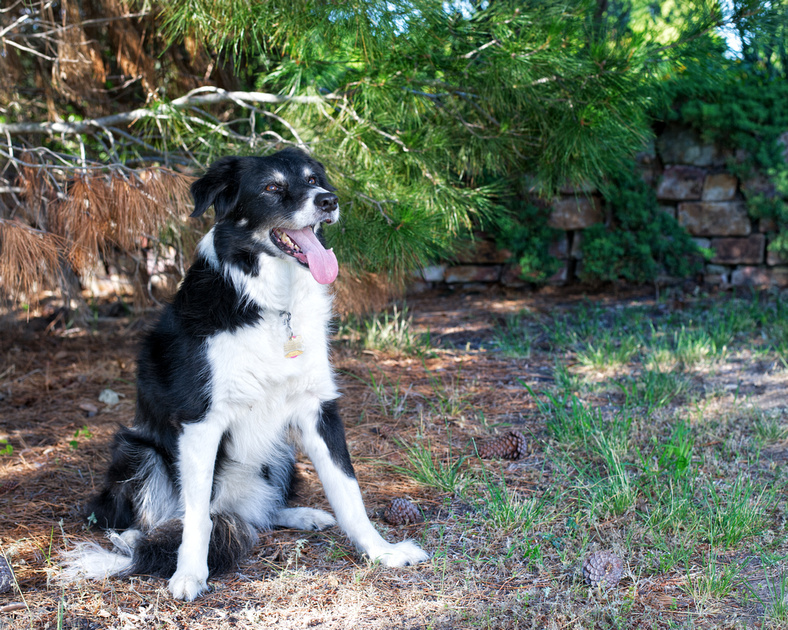 Finally, we put Belle under another tree with dark bark to her left and other, lighter, chunks of wood behind her to her right. The bark to her left would soak up any light we could use, and the light bouncing off the wood in back would unbalance the exposure. Once again we went for more of a direct "main light" effect, positioning Peggy and I exactly as we did at the other tree. This time, however, we moved the reflection a bit to Belle's left allowing us to light up that darker side of her face and spill onto the bark, and playing down the brighter wood to her rear right. I would want to play with this one a bit more, but the balance of light on her face is pretty good without bleaching the cut wood in the background too badly. 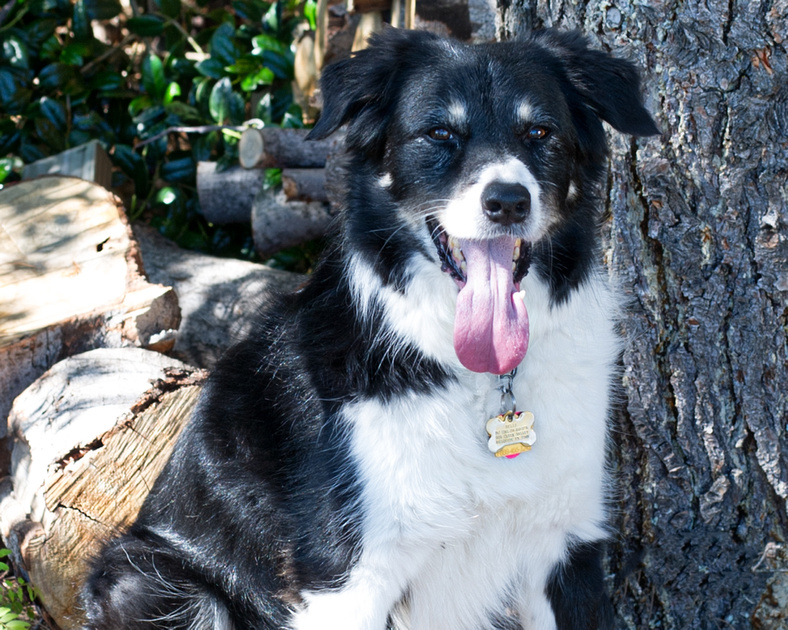 So this was a great learning experience for me. We did lots of experimentation, and I will definitely use these techniques for balancing light when outside.

For the next participant in the BB Project 52 Ring, check out Marna Niebergall de Rojas of Embracing Grace Photography in Chicago IL.

Pat Corl(non-registered)
Belle is a rock, she is my go too dog to try different techniques. She is wonderfully trained and will put up with most anything. Hard to believe she is a rough and tough dog on sheep.
jennifer(non-registered)
great job
Bonnie(non-registered)
This was a great exercise! I love all of your detailed descriptions! And Belle, what a great model!
Barbara Brady-Smith(non-registered)
Wow, what an instructive post with gorgeous images to go along with it. Belle is beautiful!
No comments posted.
Loading...